Sunday Playlist – The Challenge to Religion 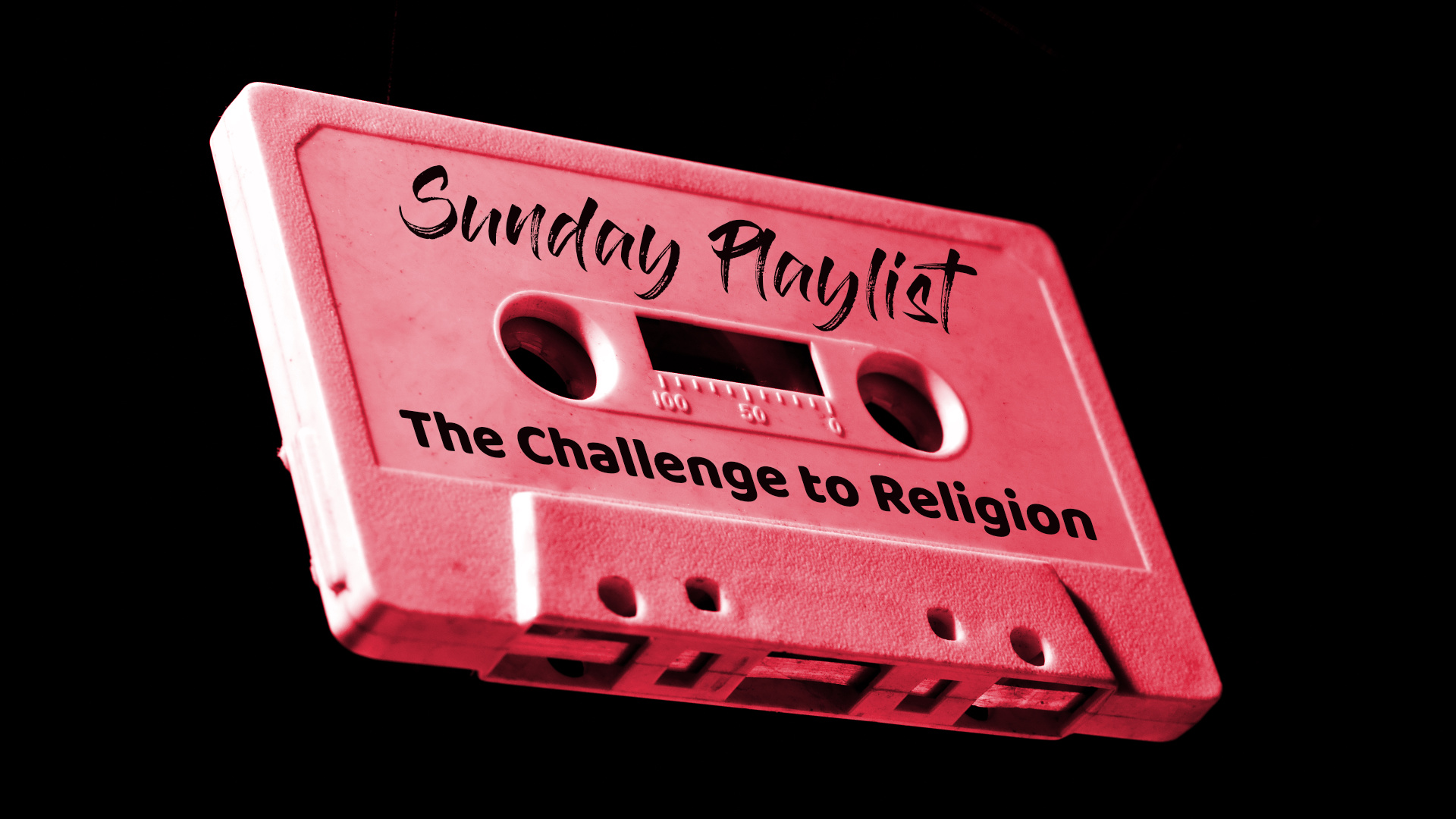 We all will acknowledge how difficult it is during these days but we must also remember, as the story of Stephen highlights, that compared with so many of our brothers and sisters in Christ, we still have so much freedom: freedom to think and say what we want (within reason!), freedom to read the bible, freedom to meet via technology, and so much more.

Let’s not forget those who are not only restricted by the same lockdown measures as us but face the much greater restriction of not being able to live as Christians without fear of persecution.

If you want to know more, here is a good website to visit.

Stephen is usually thought to be the first ‘Christian martyr’ but the words of this song reminded me that it was actually John the baptist who was the first recorded casualty of the Jesus movement; he declared truth to power and it cost him his head.

DC Talk were the first Christian artist I heard before following Jesus and, at the time, I think I probably would have called them ‘freaks’! ‘Jesus Freak’ was also a term one of my family members called me when I told them I was going to be baptised. It seems people are always much happier if you were just a little less ‘extreme’ or ‘fundamental’ in your passions and convictions; a little less ‘offensive’ and more palatable to the liberal, ‘publicly correct’ anxieties of the day.

DC Talk wrote this song after one of the all-too-familiar high school shootings in the USA where, it is reported, several students refused to deny their faith at the point of a gun. It cost them their lives but, like John, Stephen, and tens of thousands since, it was a price they were willing to pay for their Lord.

Their commitment to Jesus is very challenging to me and I have often asked myself the question: would I deny Jesus if faced with death? I’m not sure any of us could answer that question unless we actually had to face it, and I hope we never do, but I do want to have the sort of faith that is resolute in the face of great opposition and if being called a ‘Jesus freak’ is a result, it is an incredibly small price to pay.

This song contains one of my favourite lyrics of all time:

You’re packing a suitcase for a place none of us has been. A place that has to be believed to be seen.

Like all Spirit-filled believers, Stephen was living out a reality not everyone could see or understand; the reality of God’s kingdom breaking in to earth’s dimension. It is faith in Jesus alone which opens people’s eyes to see it.

The story of Stephen’s brutal murder contains Luke’s description of his face shining ‘like that of an angel’ (the echoes of Moses’ glowing face are clearly meant to be heard here as Stephen responds to the accusation that he is ditching the law of Moses). Luke also recounts that Stephen had a vision of God’s glory and of Jesus standing at His right hand; something the religious authorities couldn’t see themselves.

That vision was what sustained Stephen and enabled him to pray, as Jesus did from the cross, that God would not ‘count their sin against them’.

That vision can still sustain us today.

‘We have overcome’ by Rivers and Robots

Though the storm may come we are unashamed
Of the name above all other names
He’s our victory , He’s our joy and prize
He’s the reason we lay down our lives

The lyrics in this song, written by a friend of mine called Johnathon Ogden, remind me of the a scripture in the book of Revelation chapter 12 in which the image is painted of a war in heaven, resulting in Satan being hurled to earth, where he accuses the believers:

Then I heard a loud voice in heaven say:

“Now have come the salvation and the power and the kingdom of our God, and the authority of his Messiah.

For the accuser of our brothers and sisters, who accuses them before our God day and night, has been hurled down.

They triumphed over him by the blood of the Lamb and by the word of their testimony; they did not love their lives so much as to shrink from death.

Therefore rejoice, you heavens and you who dwell in them!

But woe to the earth and the sea,because the devil has gone down to you!

He is filled with fury, because he knows that his time is short.”

Jesus told his disciples that they would be hated and persecuted because of him (John 15) and it has proved to be the case. It is estimated that more Christians lost their lives for the sake of the gospel in the 20th century that all of the 19 centuries preceding it. 2000 years is a long time to wait and, like the exiled people of God in the Old Testament, I’m sure persecuted believers are praying ‘How long O Lord’?

Whilst believers may lose their lives for Jesus’ sake, ultimately, they will triumph because of His blood and the testimony of what He has done in their lives.

‘I have decided to follow Jesus’ by Elevation Worship

Over 150 years ago, missionaries from Great Britain and Germany traveled to northeast India to preach the gospel.

A story is told by an Indian preacher about a man, his wife and two children who were converted to Christ around this time. Their spontaneous faith spread throughout the village, angering the leader of the community. He summoned the man before the village and demanded that he renounce his Christian faith or face execution.

Enraged, the chief ordered the archers to shoot the two children. As both of the boys lay twitching on the ground, the chief asked, “Now will you renounce your faith? You have lost both of your children. You will lose your wife as well.”

The chief was beside himself with rage and he ordered the wife put to death. Now he asked for the final time, “Now I will give you one more opportunity to deny your faith and live. There is no one for you in the world.”

Eventually the courage of this man and his family would lead to the conversion of this chief and the entire village, but he didn’t know that at that time. His call was simply to be unashamed of the gospel.

Their death (as is the death of all His saints) was a tragedy and not something that God allows lightly (see Psalm 116:15). Yet, God was able to cause something beautiful to come out of it. In the words of the second century church leader Tertullian, ‘the blood of the martyrs is the seed of the church’.

Stephen was accused of ‘speaking against the law of Moses and against the temple’. His response was to give the Sadducees a history lesson, focussing on the fact the God was at work in his world way before the law was given and the temple was built in Jerusalem. God could not, and still will not, be confined to the ‘boxes’ we often like to keep him in.

As well as the echoes of Moses’ face shining after being with God on Mount Sinai, his ‘burning bush’ experience is a reminder that even the most remote places can be ‘holy’ when we become aware of God’s omnipresence.

During this time we cannot meet together in a building, I’m reminded, that as much as I miss being with my brothers and sisters in Christ, the building is not where God lives!

May you be sustained this week, whatever challenges come your way, by a vision of God’s glory and may you become more aware of his presence in the most ordinary of places.

Salford Elim Church will use the information you provide on this form to keep in touch with you and to provide updates, so please let us know all the ways you would like to hear from us.

You can change your mind at any time by clicking the unsubscribe link in the footer of any email you receive from us, or by contacting us at news@salfordelimchurch.org. We will treat your information with respect. For more information about our privacy practices please visit our website. By clicking below, you agree that we may process your information in accordance with these terms.

We use Mailchimp as our marketing platform. By clicking below to subscribe, you acknowledge that your information will be transferred to Mailchimp for processing. Learn more about Mailchimp's privacy practices here.