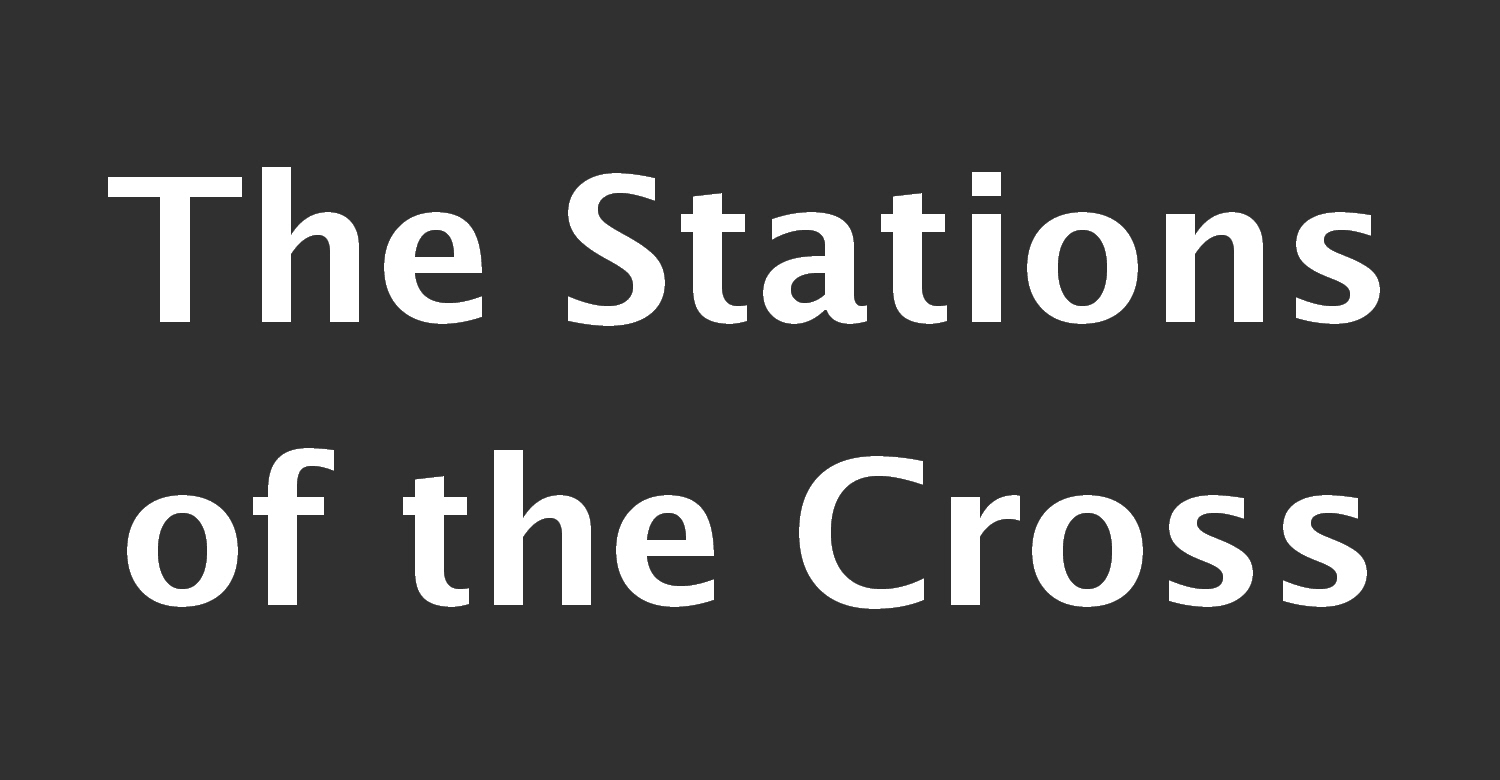 In our Good Friday service, we spent our time reflecting on Jesus’ journey to the cross, and used the Stations of the Cross to focus on the different stages of this, from being condemned to death, through to his burial in the tomb.

As part of this, some members of our church created a series of images to accompany each station, which we’ve shared below.

Please spend some time reflecting on his journey with us.

Station 1: Jesus is condemned to death 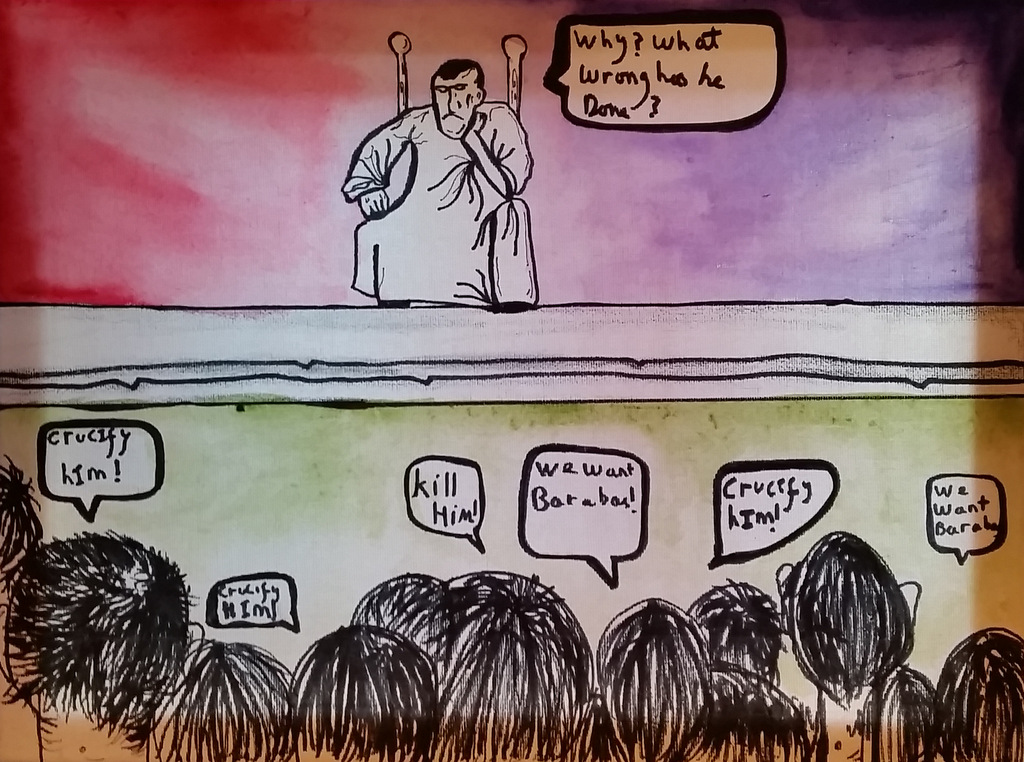 We are not mere onlookers. As sinners, we, too, shout with the crowd, “Crucify him!”

May our voice instead be hushed in a humble prayer for forgiveness: “Out of the depths I cry to you, O Lord; Lord hear my voice . . . for with you is forgiveness and plenteous redemption” (Ps. 130).

“Have mercy on me, O God, in your goodness; in the greatness of your compassion wipe out my offence. Thoroughly wash me of my guilt, and of sin cleanse me”(Ps. 51).

Station 2: Jesus takes up his cross 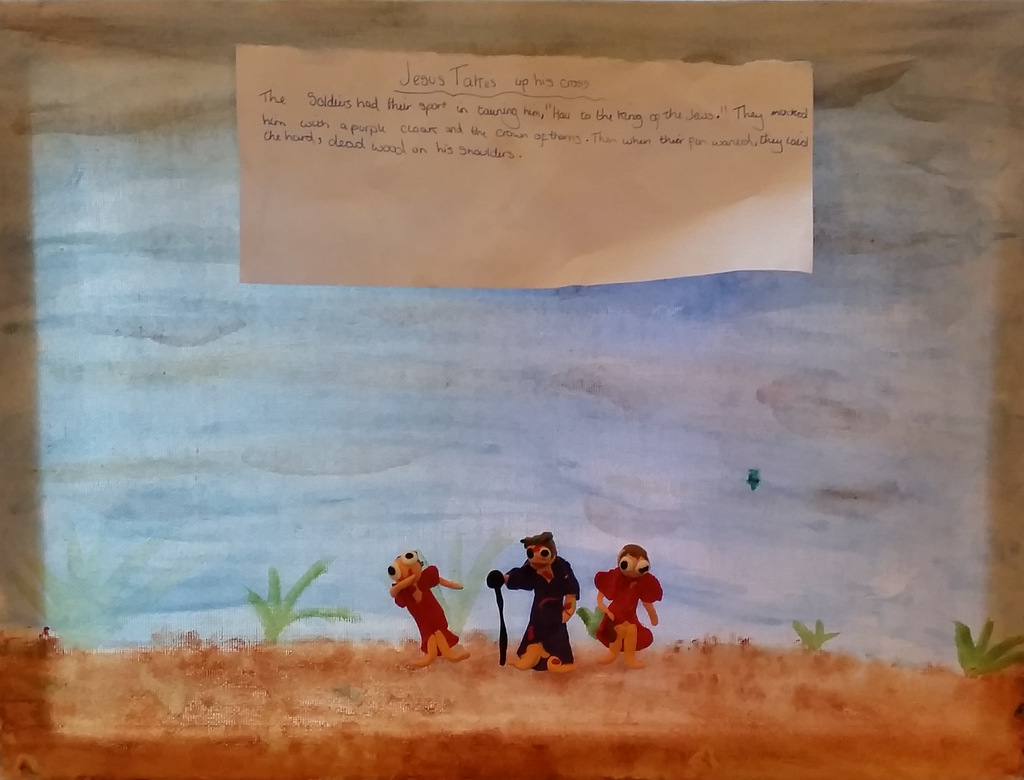 The soldiers had their sport in taunting him, “Hail to the King of the Jews.” They mocked him with a purple cloak and the crown of thorns. Then when their fun waned, they laid the hard, dead wood on his shoulders. He accepted it willingly, eagerly.

Jesus had said, “Whoever does not bear his own cross and come after me, cannot be my disciple. He who finds his life will lose it, and he who loses his life for my sake will find it”(Lk. 14 / Mt. 10). 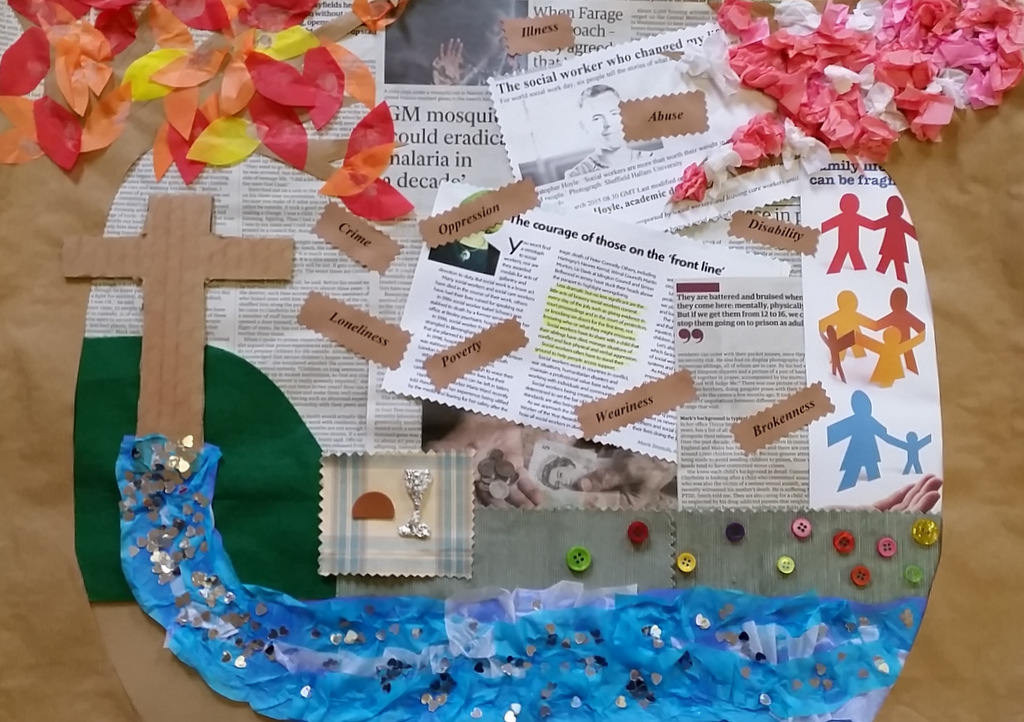 Tradition speaks of Jesus falling three times on his painful journey. Exhausted and overcome by the oppressive burden, he fell to the ground.

St. Paul has spoken of the cross as being a stumbling block, as madness. But to those who are called, this broken Jesus is the Christ, the power and the wisdom of God. For “God’s foolishness is wiser than human wisdom, and God’s weakness is stronger than human strength”(I Cor. 1).

We all are burdened in mind and body. Illness and weariness, the pace of our days, the pressures of our responsibilities, are the cross we have to carry.

Jesus speaks to us, “Come to me, all you who labour and are burdened, and I will give you rest. For my yoke is easy and my burden light”(Mt. 11)? 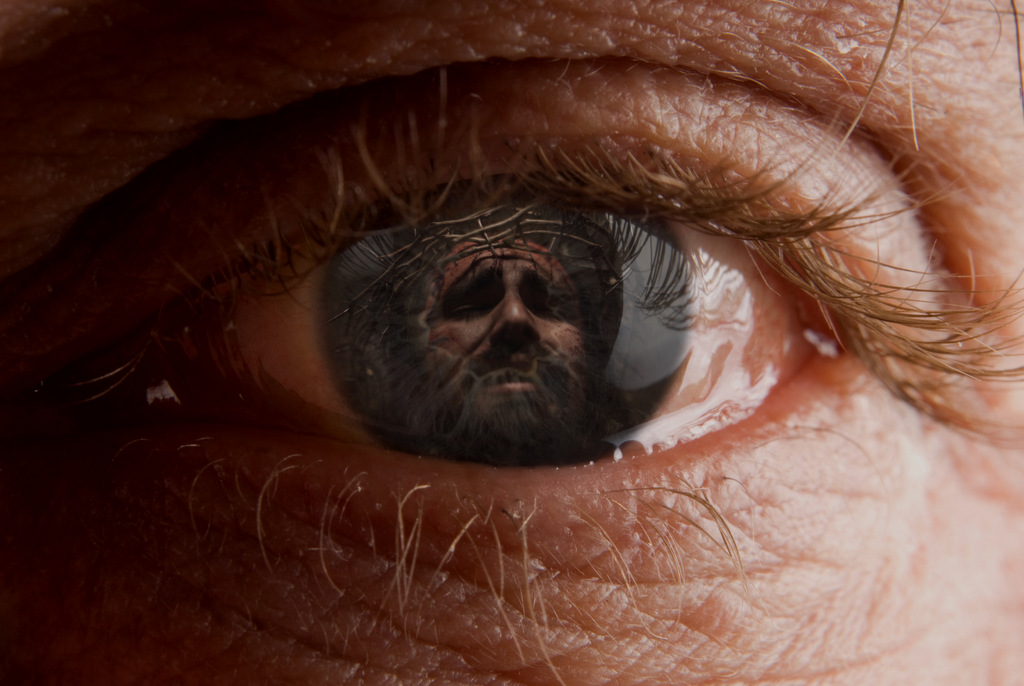 Again tradition tells us of a meeting of mother and son on his way to execution.

She was so much the centre of the beginning of this redemptive mystery; she was with him for many of his preaching and healing adventures; she would stand beneath the cross at the end. Isn’t it likely that the one who is the model of faith and solidarity would also take part in this last journey?

In the temple, to Mary, the old man said, “This child is destined to be a sign that is rejected — and a sword will pierce your own soul too”(Lk.2).

Station 5: The cross is laid on Simon of Cyrene 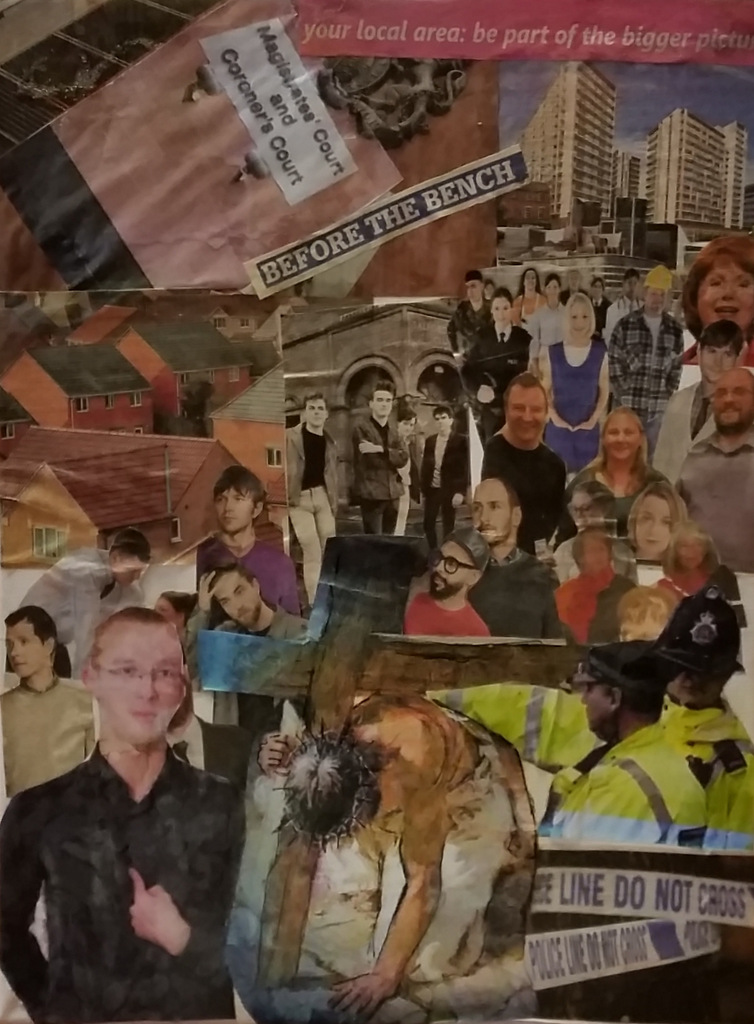 “And they forced a certain passerby, Simon of Cyrene, coming in from the country, to carry his cross behind him”(Mt. 15 / Lk.23).

Jesus had not enough strength to support his cross. His spirit was willing, but his flesh — our flesh — was weak. In a short while, the cross would embrace him. “Why me?” protested Simon, and we have said it too.

It can be hard to bear the burden of discipleship. Sometimes it is thrust upon us. Paul says, “Each one has his own load to carry,” and yet we are called also to “help bear one another’s burdens”(Gal. 6). 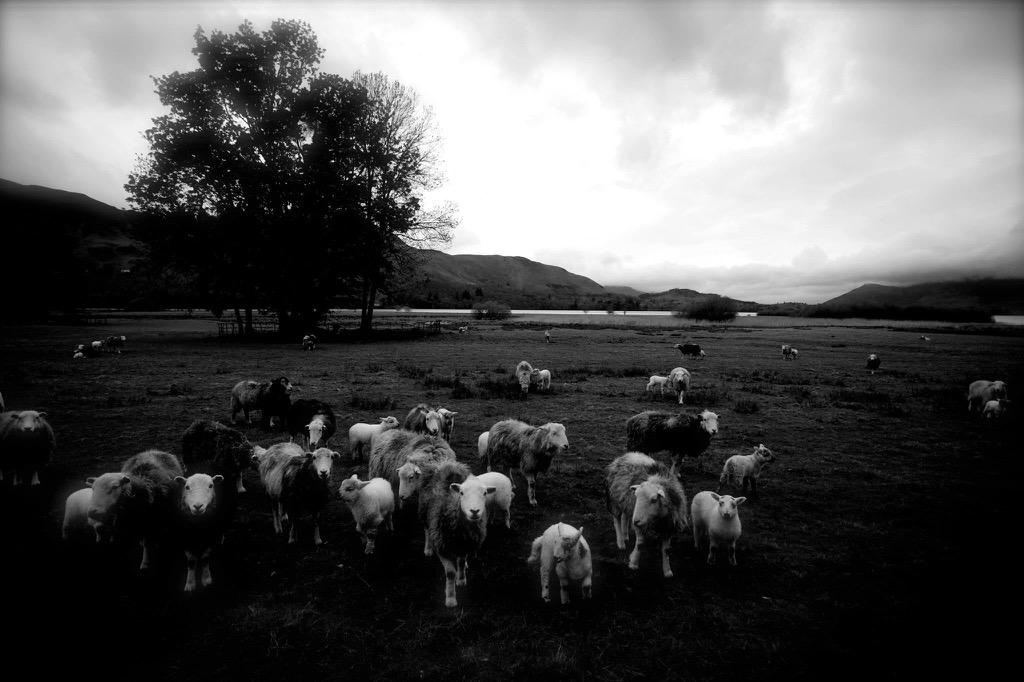 “We had all gone astray like sheep, each following his own way; but the Lord laid upon him the guilt of us all”(Isa. 53).

“For our sake God made him who knew no sin to be sin, so that in him we might become the goodness of God”(2Cor. 5).

Laden with our sin, Jesus fell again. Lord, we who call ourselves by your name and sign ourselves with your saving cross, continue to stumble and fall. You said to the paralytic, “Get up and walk… your sins are forgiven you”(Mk. 2).

Heal our weaknesses with your saving word so we, like you, can get up again and complete our journey. 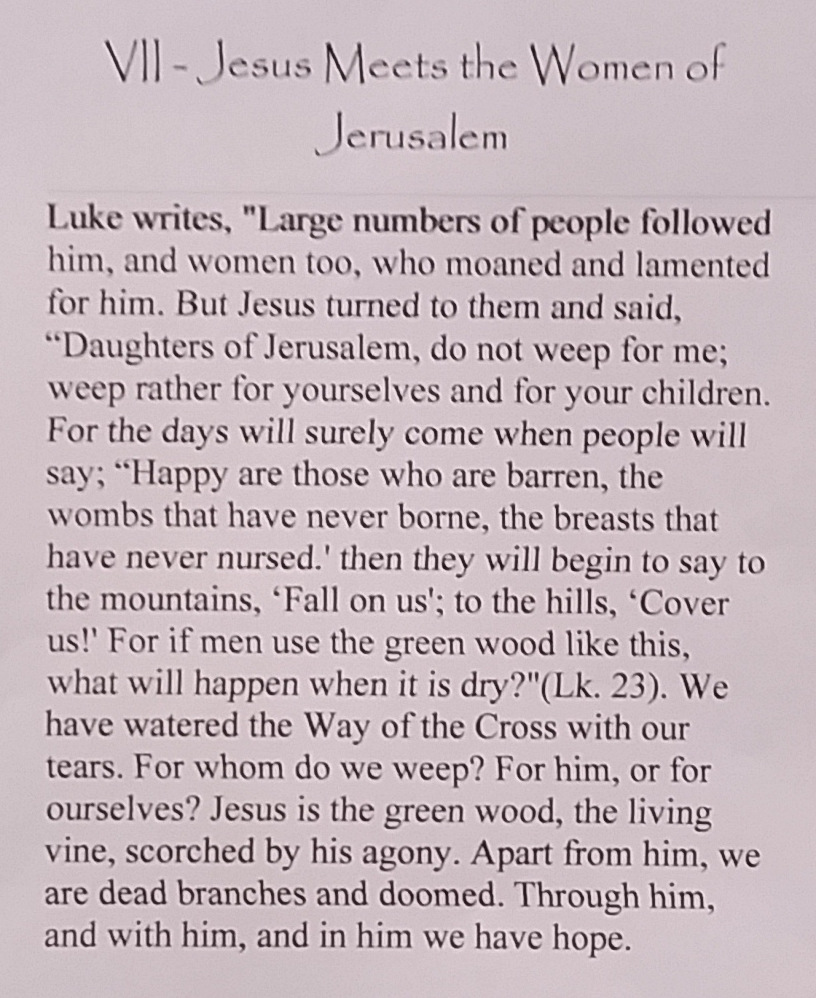 Luke writes, “Large numbers of people followed him, and women too, who moaned and lamented for him. But Jesus turned to them and said, “Daughters of Jerusalem, do not weep for me; weep rather for yourselves and for your children. For the days will surely come when people will say; “Happy are those who are barren, the wombs that have never borne, the breasts that have never nursed.’ then they will begin to say to the mountains, ‘Fall on us’; to the hills, ‘Cover us!’ For if men use the green wood like this, what will happen when it is dry?”(Lk. 23).

We have watered the Way of the Cross with our tears. For whom do we weep? For him, or for ourselves? Jesus is the green wood, the living vine, scorched by his agony. Apart from him, we are dead branches and doomed. Through him, and with him, and in him we have hope.

Station 8: Jesus is stripped of his garments 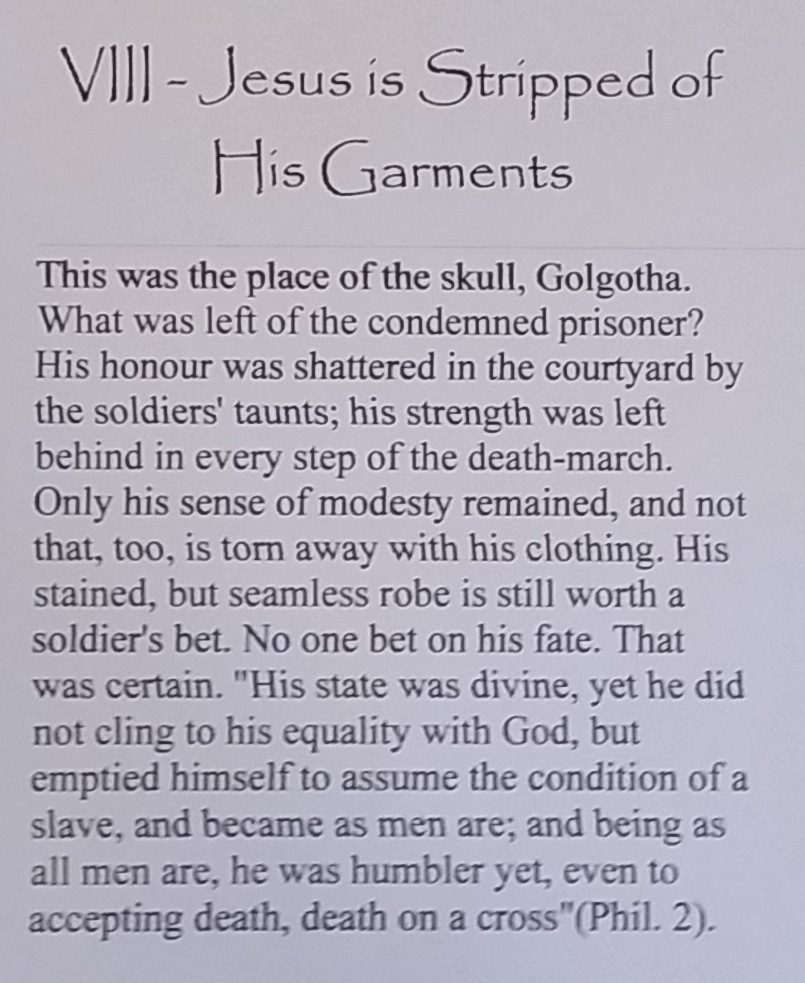 This was the place of the skull, Golgotha. What was left of the condemned prisoner? His honour was shattered in the courtyard by the soldiers’ taunts; his strength was left behind in every step of the death-march. Only his sense of modesty remained, and not that, too, is torn away with his clothing. His stained, but seamless robe is still worth a soldier’s bet.

No one bet on his fate. That was certain.

“His state was divine, yet he did not cling to his equality with God, but emptied himself to assume the condition of a slave, and became as men are; and being as all men are, he was humbler yet, even to accepting death, death on a cross”(Phil. 2).

Station 9: Jesus is nailed to the cross 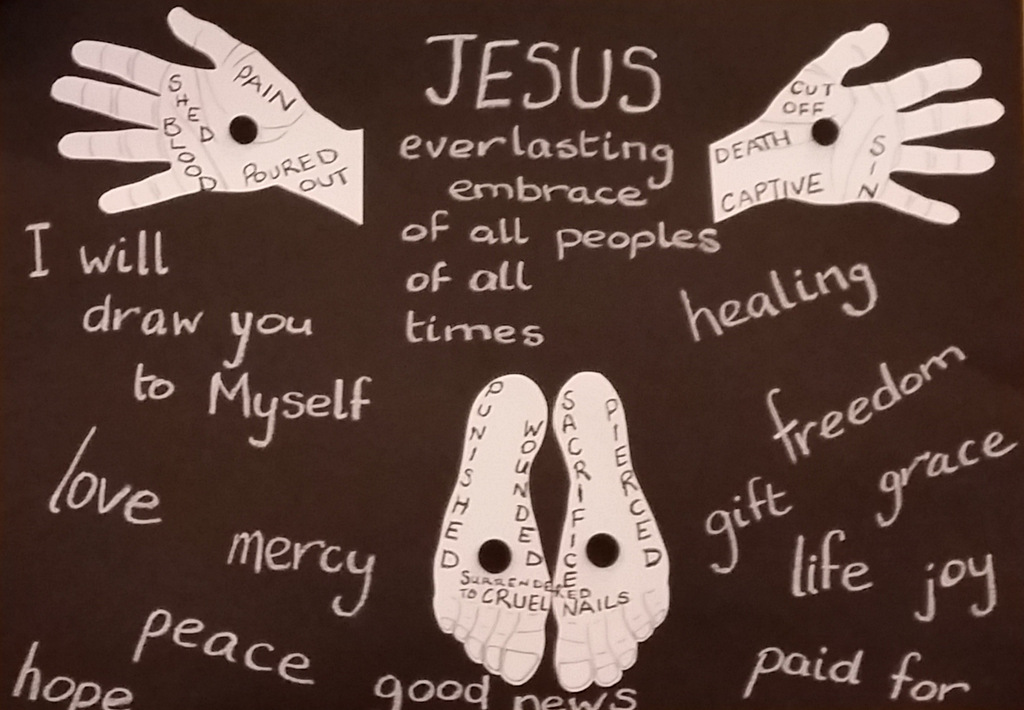 Jesus is nailed to the cross. The feet which carried the good news from town to village, the hands which so often were raised in praise and blessing, which so often reached down to raise up the lowly, are now fixed in an everlasting embrace of all peoples of all times. Had he not said, “Now has judgement come upon this world, now will this world’s prince be driven out, and I, once I am lifted up from the earth, will draw all [people] to myself,”(Jn. 12).

The script of the psalm is played out. “Here am I, now more worm than a man, scorn of mankind, jest of the people, all who see me jeer at me, they toss their heads and sneer, He relied on the Lord, let the Lord save him!’…I am like water draining away, my bones are all disjointed, my heart is like wax, melting inside me; my palate is drier than a clay pot, and my tongue is stuck to my jaw”(Ps. 22).

Station 10: Jesus dies on the cross 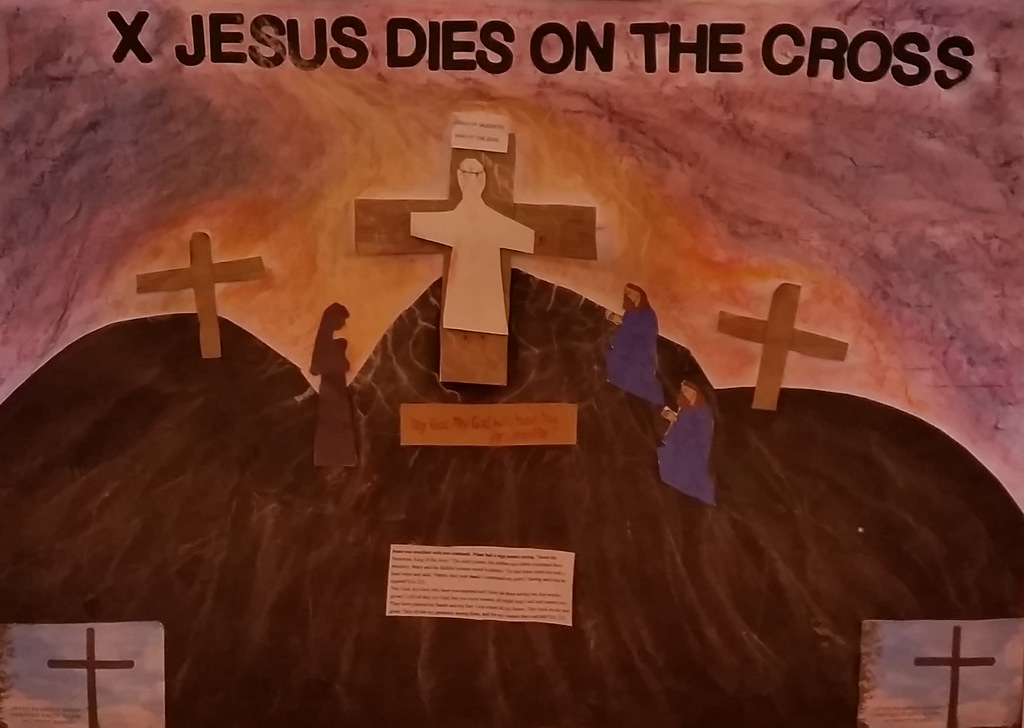 Jesus was crucified with two criminals. Pilate had a sign posted saying, “Jesus the Nazarene, King of the Jews.” The chief priests, the scribes and elders continued their mockery. Mary and the faithful women stood in silence. “At last Jesus cried out with a loud voice and said, ‘Father, into your hands I commend my spirit.’ Having said this he expired”(Lk. 23).

“My God, my God, why have you deserted me? How far from saving me, the words I groan! I call all day, my God, but you never answer, all night long I call and cannot rest. They have pierced my hands and my feet: I can count all my bones. They look on me and gloat. They divide my garments among them, and for my vesture they cast lots”(Ps. 22).

Station 11: Jesus’ body is removed from the cross 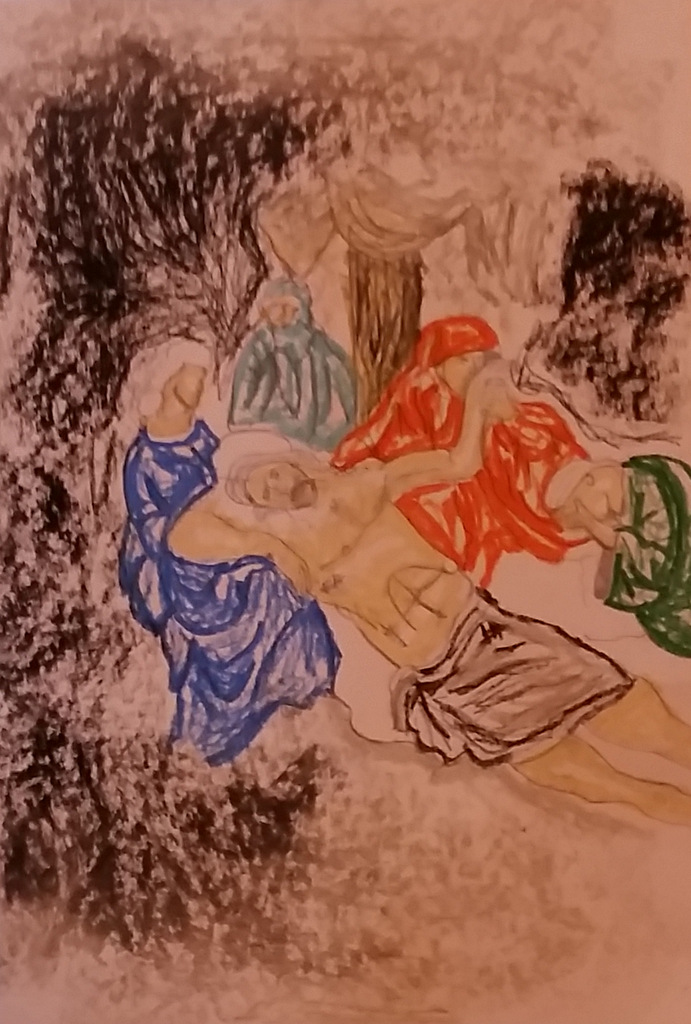 “And when evening had come, Joseph of Arimathea, prominent member of the Sanhedrin, arrived and boldly went to Pilate and asked for the body of Jesus. Pilate released the corpse to Joseph, who bought a shroud, and took Jesus down from the cross . . . “(Mk. 15).

How violently was he nailed to the cross. How tenderly did his friends remove him. Tradition, ever conscious of Mary’s presence, has passed on the sight of the mother receiving her martyred son. Michaelangelo’s masterpiece, the Piet, has fixed this scene of indescribable pathos.

“We had all gone astray like sheep, each following his own way; but the Lord laid upon him the guilt of us all. Oppressed and condemned, he was taken away, and who could have thought any more of his destiny? When he was cut off from the land of the living, and smitten for the sin of his people”(Isa. 53).

Station 12: Jesus is buried in the tomb 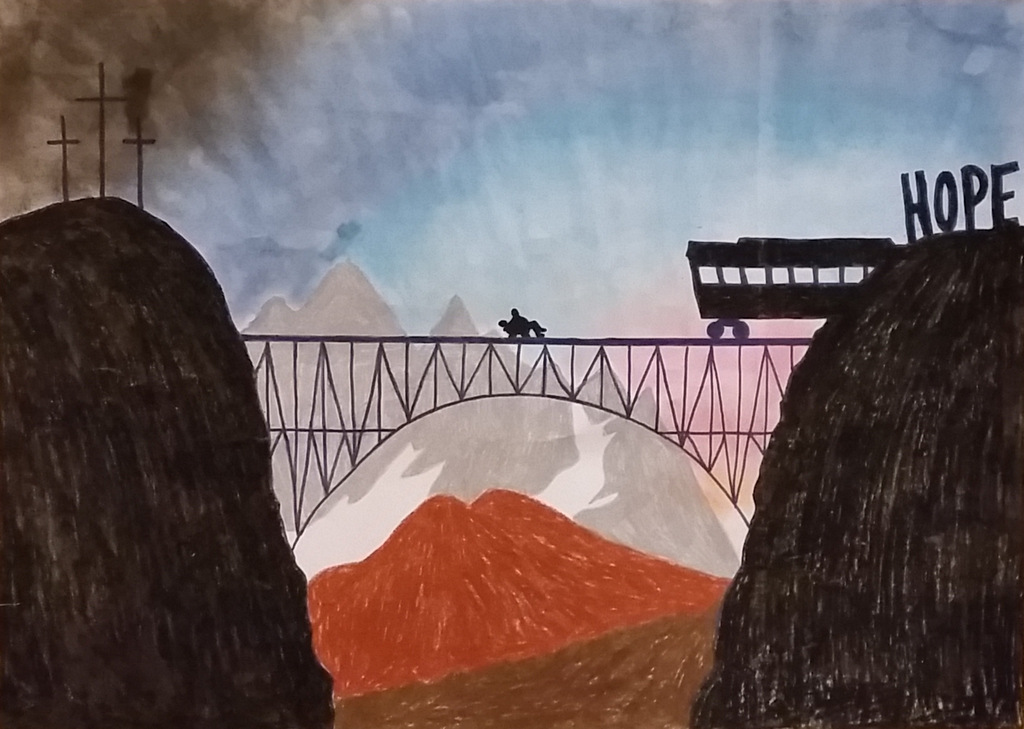 “Joseph of Arimathea and Nicodemus — the same one who had first come to Jesus at night — took the body and wrapped it in linen cloths with spices, a mixture of myrrh and aloes, following the Jewish burial custom. At the place where he had been crucified there was a garden, and in this garden a new tomb in which no on e had yet been buried. Since it was the Jewish day of Preparation and the tomb was near at hand, they laid Jesus there,”(Jn. 19)

“Mary Magdalene and the other Mary, the mother of James and Joseph, were there, sitting opposite the tomb,”(Mt. 27).

We have joined you, O Jesus, on the Way of the Cross. The hours of suffering are over, “It is finished.” From the hill of the Skull we move to the garden of burial. Hardly breathing, we wait for the Father’s response to the loving and obedient gift of your life.